Pandu: The Father of Pandavas

Prelude: Pandu is the mysterious and interesting character of Mahabharat who died before the war of Mahabharat but seeds of that war fertile in his time period. Pandu was the father of five sons who further known as Pandavas but Pandu was not their biological father.

Pandu was son of Ambalika who was the queen of Hastinapur. Ambalika’s husband was king Vichitravirya who had been died before the birth of Pandu and his two others brothers. At that time Hastinapur was running without its king and prince. There was only Bhishma who take care of all administrative work of Hastinapur. To short out this problem Ambalika’s mother in low Satyawati and Bhishma who was the mentor Hastinapur decided to call sage Vedavyasa for help.

Infect Ambika and Ambalika were two sisters and both were wives of king Vichitravirya and Parishrami was another lady who were serves them as their maid.  Bhishma and Satyawati requested sage Veda Vyasa to pregnant both of wives of Vichitravirya though Niyoga method. Sage Veda Vyasa looks very ferocious at that time due to this Ambika shut her eyes during Niyoga process and she delivered a blind child named Dhritrashtra, Ambalika kept open her eyes but she became pale after seeing sage and she delivered a pale child who was Pandu. Ambika and Ambalika both forced their maid Parishrami to go in front of sage but Parishrami face sage fearlessly and she delivered a very intelligent child named as Vidur.

Pandu and his kingdom

There is another very interesting story behind Pandu’s crown ceremony. However blind Dhritrashtra was elder than Pandu and he has first right on the crown of Hastinapur but Pandu got that crown and post of king as well.  Now, this is the most important and sensational incident of that period, which works as base of feeling helplessness and guilt in Dhritrashtra’s mind. Bhishma decided that due to blindness of Dhritrashtra, Pandu is the suitable candidate for king of Hastinapur.

As the time passes Pandu became sharp archer and expert in martial art. Pandu won several territories under the guideline of Bhishma and he became very famous and successful in very short time. 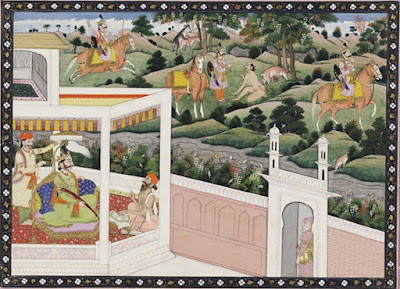 Pandu had two wives first one was Khunti who was the daughter of Kuntibhoj and second one is Madri who was the sister of prince Shalya.

Once upon a time Pandu went forest for hunting. As we know he was master archer. He also knew how to operate an arrow according to sound only. During hunting Pandu listened a sound in forest and he thought that this is the sound of an animal he operate his arrow towards this sound direction and this arrow hit the chest of sage Kindama who was in posture of love with his wife at that time. Before dying sage Kindama cursed Pandu that as he try to make love with his wife we will die as soon. After this accident Pandu decided to go forest with his wives to spend rest of his life. He handed over his kingdom to blind Dhritrashtra. Pandu took permission from his grandmother Satyawati from his both mothers Ambika and Ambalika and his mentor Bhishma and went to forest.


Once, after a long spell he saw his wife Madri and he felt that Madri looks too beautiful and exotic. There was sense of love generates in Pandu’s heart and he decided tobecome intimate with Madri and he forgot about Kindama’s curse. This mistake was the last mistake of Pandu’s life and he died immediately.
at 05:36